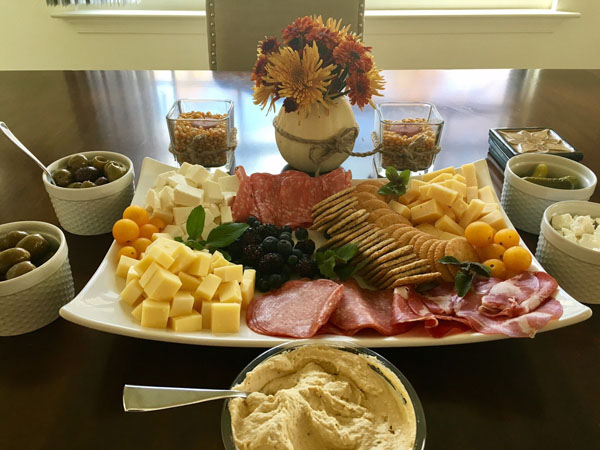 A spread of prosciutto and cheese.

There’s nothing quite like the comfort that certain foods can bring, especially when they look just as visually appetizing as they are when being eaten. Feast your eyes and your stomach, if you have the chance, on some of the delicacies below.

Be honest who doesn’t just want to tear into a spread like this and create a mini-cracker triple stack?

The Ultimate Bacon Cheeseburger. If you can get your mouth around it then you’ve earned it.

Brisket, pork ribs, and potato salad in Austin, TX! Well how do!

Brisket, Sausage, Pork Rib With Mac n cheese, Green Beans, and White Bread from Terry Black’s BBQ in Austin, TX. You get the feeling they like meat in Texas?

Cheeseburger with Caramelised Peppers and Onions on a Toasted Brioche Bun. Not sure if a person would eat this or it would eat them.

Chili ramen with ground pork and fresh cucumber spears. Well, that’s a new one for me.

From the NHL All-Star game in Nashville, The Body Check — 1/2 lb slab bacon w/fried egg & cheese on french toast w/syrup. It looks like a puck got lodged in a biscuit.

Loaded Nachos. Can anyone see the chips?

Lobster Eggs Benedict. I see a couple of hunks, but I’ll be they’re tasty.

Lobster Fries with the whole Lobster. Yeah, the presentation could use a little work.

Lobster Roll and Garlic Roll. A pocket full of goodness.

Onion Roll Breakfast Bowl. And it just got medieval up in this piece.

Seafood tower at Roof at the Wit, Chicago, IL. Look at that uppity lobster up there just chillin’.

The 6 lb. Whole Frittata at Mothers Cupboard, Syracuse NY. Start at the edges and work your way in.

On one hand, eating is a function that has to take place for people to remain healthy, but there are times when you need to expand your palette and try other foods that can give you a taste of other parts of the world and their various cultures. If you take nothing else from this, take it as a sign to get out and try new foods. Your taste buds will thank you, even if your colon doesn’t.