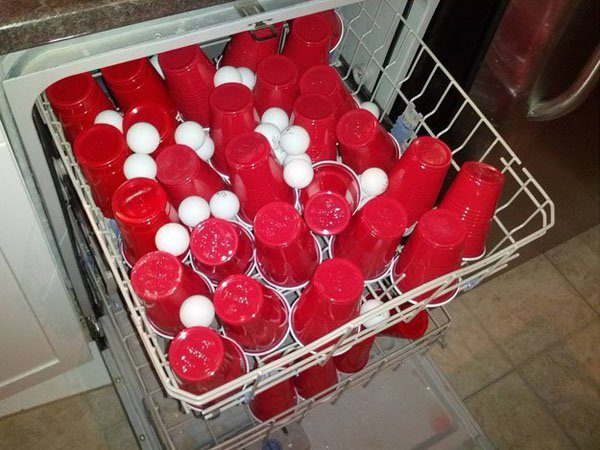 The College Struggle is Real

Let’s put it this way, when you’re still living at home in high school, you might have the chance to figure out that life isn’t a free ride so long as your parents are willing to make you pay for things. But when you move out and head off to school, you’re going to find out differently, hopefully, since the expenses you’ll incur when heading off to school aren’t going to stop, at least as long as you want the lights to stay on and your belly to stay full.

Here are a few things that you might laugh at whether you’ve been through them or not. But never forget, the struggle is VERY real.

It looks ghetto, doesn’t it? But if you’ve literally counted pennies and nickels and debated between eating and paying the bills, you’ll get this one.

Hey, ice can be spendy since it means powering the refrigerator to produce it. But put a frosty brew on the porch in the winter for a little while and you’ve got the makings of an ice pack. Don’t bother with logic, it’s usually best left in the classroom.

Seriously, if you’re wearing your shoes this isn’t a big deal, but unless you want to suck up your pride and go to the nearest Goodwill or bargain-basement store then…no, no, this is just stupid. Even college kids aren’t quite this desperate.

The only difference is that in prison the cheese wouldn’t be melted unless you had the means to cook it, and that means hadn’t been confiscated. But ramen is inexpensive, it’d be the cheese and meat that might set you back.

This is definitely something that can happen, but one thing about it is that paper towels WILL clog the drain, and if it’s a communal bathroom then you’ll have a lot of pissed-off people to deal with.

If you’re washing Solo cups it could indicate that you’re spending too much money on alcohol. Yes, there is such a thing.

Bread is also cheap if you lower your standards for a bit, remember THAT.

Some folks would just leave the bag in a plastic puddle on the floor, so kudos to this person.

College, kind of like the Marines, is where a person can learn to survive since the cost of everything is so expensive that you kind of have to make do with what’s around and MacGyver the hell out of everything.

As for the bottle, well…just wash it first.

I’m kidding, kind of, but being smart and crafty in college is a great way to survive.

You’d best hope that you don’t have a roommate that loves their coffee, because this could be seen as a serious sign of disrespect.

One thing you’ll need to do in college is learn how to prioritize. Seriously, a microwave isn’t that much if you know where to shop.

It’s an idea, that’s for sure.

You get out of college what you put into it, but the truth is that sometimes you have to put in a lot of extra once you’re done.

College isn’t all about debt and struggling, and you can get a lot out of it if you know how to navigate your time in whichever institution you select.

I’ll always be an advocate for higher learning since it’s possible to get a lot out of school and to pay off those debts by actually applying yourself instead of pissing and moaning that you partied through your college years and didn’t get what you want. It’s a struggle, and some Radasser’s might know that quite well, but some of you can no doubt agree that it’s worth it if you make it work.