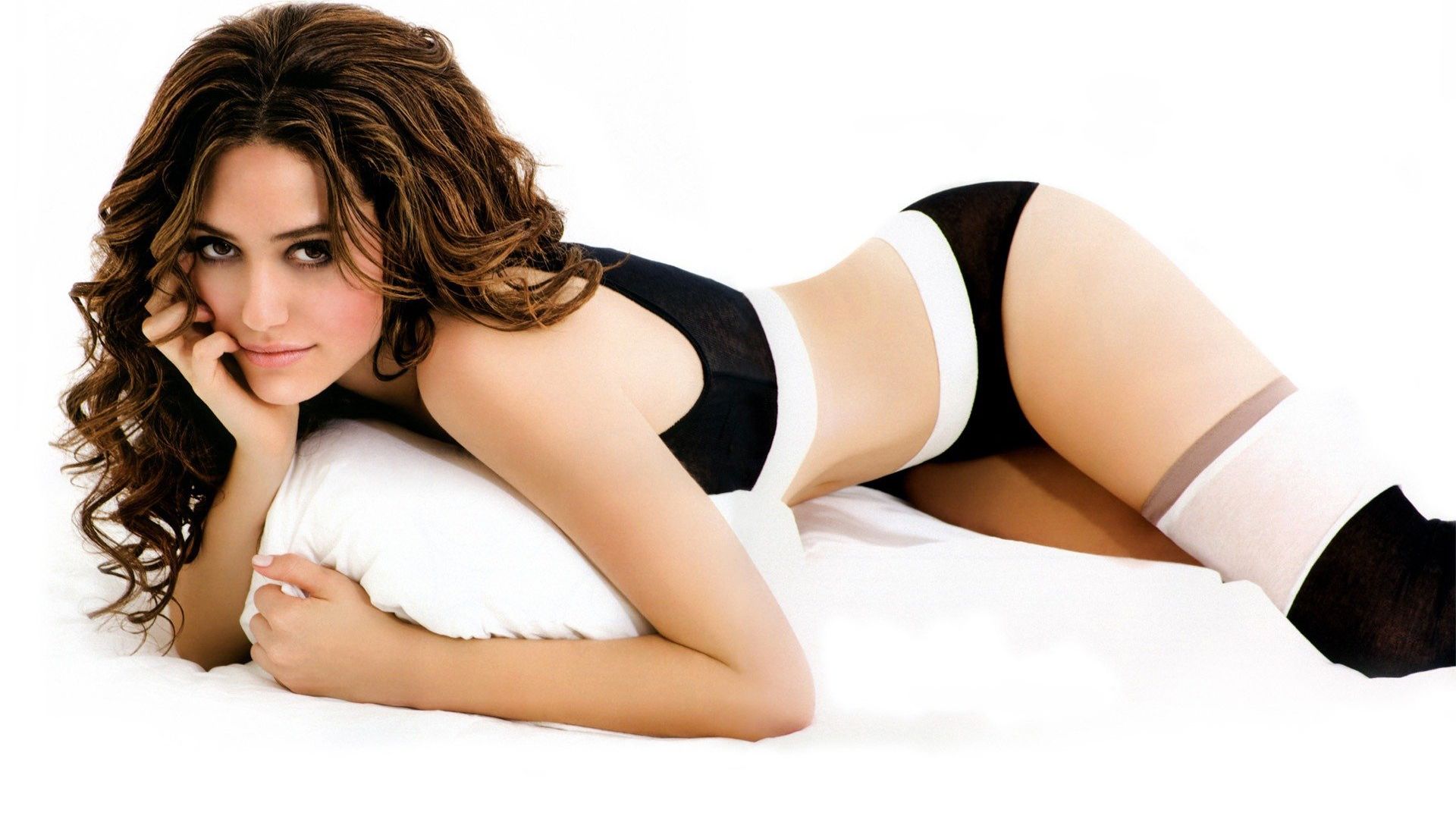 Halfway through the week, you might need a pick-me-up.

You’ve got to admit, getting through the week is a little difficult at times, and Hump Day isn’t always a bad joke, especially when you can find ways to get a bit of a perk in your step. Sometimes it could be a kind word, and other times it can be taking a look at something that might be pleasing to the eye. Whatever it is you’re bound to feel a little better once you take the time to pay attention and unwind just a bit.

Focus on the positives

Let’s be fair, a good-looking woman is a great way to unwind. That line across her throat might be a bit disconcerting, but let’s pretend just for a moment that it’s an elaborate sort of choker that’s meant to be decorative, or ironic, or whatever. But focusing on other aspects aside from that can definitely get your mind into a far more positive place, right? I know my mind is going nice and blank after looking for a few seconds too long. Anyway, moving on…

She definitely knows how to get attention

From the seductive look to the detailed tattoo to the dress that’s currently making me dizzy, this woman knows how to get a man’s attention and doesn’t have to work too hard. Does anyone doubt that women the world over know how to get what they want when they really put their mind to it? There’s no need to make that a negative thing since the knowledge that attractive women all over the world can bat their pretty eyes a few times and get a lot of guys to do pretty much whatever they want. But when coupled with the idea of this dress and that tat, well, it’s fair to say that the poor guy that she wants to get something from might not have a lot of defenses in place to stop her from getting it.

Always down for a little cosplay

Hump Day isn’t JUST about one thing or another to be fair, since the middle of the week means a few different things for a lot of people. But in this case, we’re pleased to give you whatever images we can find when it comes to giving you the best possible chance to feel a little bit happy when looking through our material. I can’t help but make it clear that pictures like these are for me as well as the readers, since being a nerd and embracing it means that cosplay is a part of life that I’m not ready to turn away from. How about you? Would you really just turn away from a woman that loves to engage in cosplay? Some of them get so deep into it that you can’t help but call them by the name of the character they’re portraying, and to be completely honest, that’s damned hot.

Seriously, cosplay Hump Day has an interesting ring to it.

She was a country girl…

Admittedly, I don’t know if this woman is a country girl or not, but she can certainly rock the look and make one think that she would fit into a DF Dub video without fail. There’s something so sexy about short shorts and a top that’s defying the laws of physics that makes a lot of guys start to drool uncontrollably. I’d hand you a tissue if I could, and hope like hell that you’d wipe your face and do nothing else with it. Appreciating beautiful women and enjoying their pictures is one thing, but let’s keep it respectable, yeah? I get it, she’s hot, she’s gorgeous, but that’s more reason to respect the woman, which is one of the things we’re all about here. I get it though, she’s hot.

Why so many clothes Marvel, why?

To be realistic it is a sarcastic question since there are some things that even a comic book character can’t do, like keep one’s attention on their gravity-defying garments at all times. I mean seriously, the Phoenix is hella cool and all, but she usually has other things to worry about than keeping herself fully covered. But it’s easy enough to admit that this look is bound to get the attention of a lot of guys, whether they’re comic buffs or not. The Phoenix/Jean Grey has always been a personal favorite. Red hair, awesome powers, and she’s beautiful to boot? What’s not to like? Well, apart from the fact that her powers could destroy a planet and all…but hey, details.

Here’s looking at you

There’s something in a pose, isn’t there? A person could look through a thousand photos and find only a few that were really provocative while the others might be kind of ‘meh’. It doesn’t even matter how hot a woman is, there’s something about a pose that gets a guy’s attention and doesn’t let up since it says something that’s hard to define in words sometimes. Oh, there are plenty of folks out there who would take the time to describe how she’s posing, what she’s wearing, and perhaps even nail down the style and designer that was responsible for this look. But dissecting a picture feels a little clinical and pointless sometimes, especially when one gets to thinking that it’s better to simply enjoy the moment and not worry too much about details unless it’s necessary.

Crazy as hell but oh so tempting

So, are you the type of guy that thinks he can handle someone like Jinx, or just thinks he can? If a woman like this exists in the real world, and there’s no good reason to doubt that it’s possible, then there must be a man out there that’s willing to at least try to be a part of that woman’s life, if only to see if he can withstand the wild energy that some folks can give off so often and without any notice. In terms of cosplay, the look of this character is something that many women can pull off, but some go all-in and decide to create one of the most alluring yet crazy looks that anyone could hope to pull off. It’s got to be said, this is one look that a lot of folks, fans, and non-fans, should be able to appreciate since there’s something so inherently dangerous about this character that draws people in no matter that Jinx is a walking cautionary tale wrapped in TNT, with a match in hand ready to light it up.

The pose inspires the prose

Pictures like this remind me and should remind a lot of people, why there are so many poems out there written by lovestruck men that were so impressed by what they saw that they couldn’t help but write a sonnet or three about love, women, and how the two could be combined in several ways. Of course, on the opposite side of this, a lot of guys who were rejected over and over went the other way with it. But at the very least, the starting point was usually positive, right?

Some of us do have a type

I’ll admit it, I’m a sucker for red hair and women that act like badasses, especially those who really are. But this character caught my eye after playing Horizon: Zero Dawn and the image has stuck. Seeing a woman that can rock this look so well is an easy way to get excited since imagining being on the hunt with a woman like this at your side is just…oh yeah.

Let’s not disregard what the color pink can do

Get your minds out of the gutter, if they were going that way at least. There is something alluring about the color pink, isn’t there? It’s okay to admit it, pink is just a color after all, but the fact is that it has an effect on a lot of guys that is tough to deny.

I know it sounds wild and a little out there, but this is Radass, so enjoy it. Imagine dating a woman like Mystique (I did say imagine keep in mind) and learning she could shapeshift into anyone. How savage would that be if she decided to do this at certain…intimate moments, and freak her partner out? Just thinking about it is enough to cause a person to cringe.

Is it cold in there, or is she secretly excited?

Amazingly enough, I can see a lot of guys getting into a debate about this and possibly even putting some money down on it. One couldn’t really tell from her expression that she’s anything but contemplative, but to be fair, a lot of women are good at hiding things. No offense ladies, but unlike men, you’re not always as open.

Yeah, take that one as you will…

I mean, if you really have to ask then you might need a lesson on why hot women are such a popular topic. And if you still don’t get it, then move along…But here at Radass, we’re all about appreciating women in our own way and sharing that with others, so Happy Hump Day!