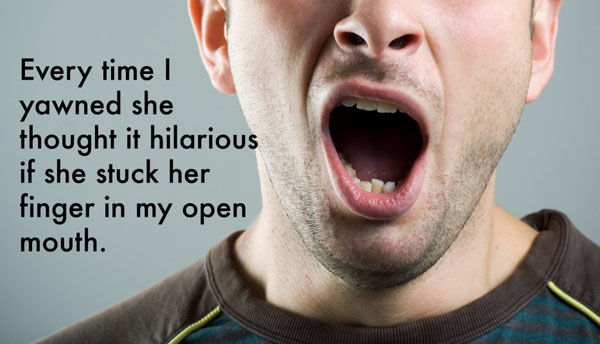 The Most Shallow and Hilarious Ways For Breaking Up With Someone

How low can you go?

Well, she’s not totally wrong, since warm slaw is kind of blech.

That’s kind of odd, and inefficient. How does she brush her teeth I wonder?

Some women are extra, it’s true.

Someone’s got a few Oedipus issue.

Some guys are a bit too sensitive.

Someone got too used to the TV experience.

Okay, that’s a bit troubling. It’s like putting the knife in the peanut butter and then in the jelly when making a sandwich.

So processed ‘chicken’ and crispy oil sticks…how old is she?

Sure you can, take her to a buffet, no one gives a damn how you eat, just as long as you’re not eating out of the pans.

The pettiness is strong with some folks.

That’s actually grounds for a fight in some households.

That could be taken so many ways.

Hey, some folks have issues.

Honestly, some individuals need to reassess their values.

Hopefully it was clean, but I doubt it.

Was he dating the female version of Rain Man?

Yeah, I don’t think she was the problem.

Are you sure your girlfriend was human and not a digital dream?

Okay, that might get kind of annoying. But it might be a good idea to get into baking and really cause her to moan with pleasure.

Is it wrong that I’d like to bitch-slap a lot of these guys?

How tall was she? It’s easy for a big guy to outpace anyone.

That sounds kind of constrictive.

I’m kind of done with guys that are this petty.

Look at it this way, Dano is a star and makes a lot of money.

Seriously, most of what you saw on this list comes down to this:

Basically, spoiled punks that can’t get over themselves. Guys, for your sake, for the sake of women, straighten yourselves out and learn that you can deal with more than you realize.