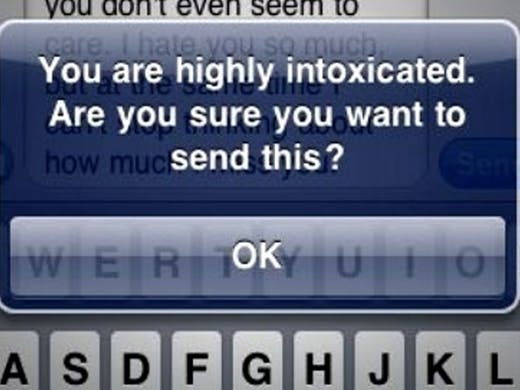 Admit it, you’ve been drunk, stoned, or at least moderately buzzed in the past and whipped out your phone, thinking that it’s the best time in the world to ring your buddy, if they’re not with you (hell, even if they’re with you it might be fun) to give them a piece of your mind or tell them how you’ve felt for so many years. Or worse, you might decide that it’s a good idea to text your ex, which is one of the worse things that you could possibly do (trust experience on this one). The point is that when you’re drunk, texting or jumping on social media to post the experience appears to be the smart thing to do since you’re having a good time and want to share the laughs. But seriously, things can get kind of…well, weird.

But damn, they can get funny too.

There are a lot of reasons why you should forget where your phone is, even if it’s in your pocket or in your hand (it does happen). When you’re drunk, just about anything you might want to do is going to be driven by impulse a lot of the time, and it’s going to be something that you probably shouldn’t do or say in whatever company you happen to find yourself in. The truth is that people say and do stupid things all the time, especially on social media. But when people are intoxicated they’re bound to do things that would make them pause when they’re sober. Almost everyone has a personal account of what happened when they were drunk and texted someone, anyone, just because they felt like it at the moment, but a lot of people have regrets about what they said the night before. There are a few examples of who you probably shouldn’t think about texting when you’ve had a few, or just took that massive bong rip.

Texting is bad enough, but posting videos, jumping on Facebook, Instagram, TikTok, and whatever else is out there is just as bad of an idea since once a video is on the internet, it’s damn near impossible to get rid of. That goes for images as well, as many people probably know by now that:

There’s a line between fun and f-ed up. Honestly, when you’re drunk it’s very easy to fall into having a good time since like it or not, being drunk loosens us up in a way that makes a lot of stuff feel less than important. That’s not necessarily a bad thing since getting drunk is a great stress reliever and it can help a person or a group kick back and enjoy their night, their day, or just enjoy their time in a shared social situation that’s meant to be fun. But there are limits to fun that should be observed if only because having fun without limits can lead to some very disturbing and f-ed up moments that we regret later on. Texting and using social media while drunk can be a problem, but it can also go further than it needs to in a very short amount of time.

A lot of people don’t want to cause problems when they’re drinking since it takes more effort to get into a fight and to sustain that energy when you’re drunk, while just having a good time and eventually passing out from all the fun is relatively easy. But when someone decides to pop off using a text or a social media post it often becomes personal since not only is the post likely to spark a feud between two or more people, but it’s also bound to go public at some point, especially if it happens on social media.

The lighter side of drunk texting is definitely a lot more fun.

Honestly, when you really get into it, laughing at people for the silly and ridiculous things they do while drunk is a lot more fun than trying to nail them for simply being that drunk and that stupid. After all, a lot of us have done something foolish when we’re drunk, like say, going streaking down a public streak with everything wobbling and hanging out for all to see. Or how about when we pass out in the strangest places and the strangest positions? Yeah, that’s a thing, and people tend to take pictures of it when they can, which is more often than you might think. Plus, the happy drunks that aren’t out to make someone’s life miserable with a lot of booze-infused feelings are often those that we can get the biggest kicks out of, especially if you’re still sober enough that you don’t join in with the gibberish lesson.

Getting a text that doesn’t make sense, or that reveals what we did the night before, or makes sense to a friend because they’re just as drunk, adds a bit of spice to life that might not have been there had the person stayed sober. When you’ve received a text at one o’clock in the morning that reads “habbnen funnen tmiie attheclb, whrerrrru? Loldohslol” then you know you’ve missed out on a good time. True, you won’t have to suffer the same hangover as the person that just texted you one of the many forgotten languages of the world, but dammit, just thinking about how that could have been YOU making that drunken text, possibly to yourself, is bound to make you wonder why you stayed home that night.

There’s nothing wrong with texting people while you’re drunk, so long as you’re aware that you’re likely going to make a fool of yourself. But since it’s very possible that this is going to happen all you can really do is brace yourself for the day after, since you’re probably going to do or say something over social media and/or text that you might not remember.