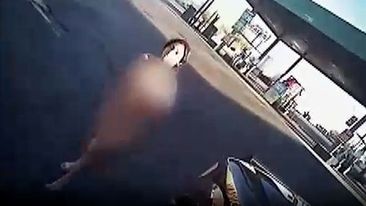 This Woman Is Butt Naked And Causin’ Trouble

Stealing police cars for joy rides is nothing new to some people, but one Arizona woman took it up a notch when she decided to steal one…butt naked.

On Thursday, a woman by the name of Lisa Luna was high AF on some gnarly drugs. As she was walking naked down the streets of Mesa, Arizona, she was caught on a police officer’s dashcam, who pulled over to help her.

What happens next is kind of a blur. Especially for Lisa, who is obviously trippin’ hard.

After he went to the back of the vehicle to get a blanket to cover her up, Lisa hopped in.

She drove the stolen vehicle for over 70 miles despite being chased by police, but eventually she was caught. Now, she is facing several felony charges. She was booked into Maricopa County Jail, with her bond set at $50,000.

Speaking from her jail cell, Lisa told reporters about her terrible trip.

Authorities believe she was high on meth. Seems about right. Don’t do drugs, kids.