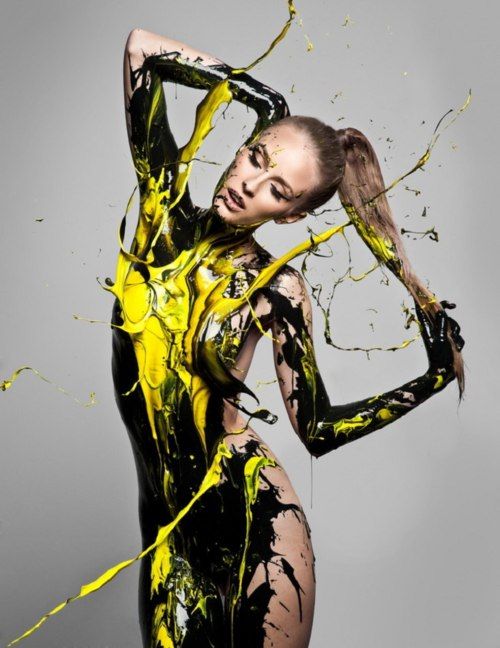 All the Painted Ladies

Body art is such a beautiful and underrepresented art form, or so it feels since perhaps too many people are willing to state that it’s not ‘appropriate’ or ‘tasteful’. Looking at the many models and displays that are put up for people to look at there might be an argument there, but sometimes looking at the models it’s kind of hard to forget what that argument is. Appreciating beauty is a pretty universal thing, but when it’s a matter of simply painting a human canvas for the sake of pornography there is a point to be made since plenty of skin flicks have made this happen and, well, yeah, it gets a little comical and even a little disturbing at times. Some might say it’s alluring, but the pornographic representation of painted ladies is more or less a way to serve the fantasies of those that need a little extra push to get the fires lit before they, well, you know.

The real beauty of body art isn’t just the model.

Seriously, looking at this beauty above is bound to get plenty of hetero men excited beyond belief, but the fact that those who look at the beauty of the image in various ways, other than merely sexual, will likely gain ridicule and derision for a couple of reasons.

There’s an appreciation for the art, and the human body

I can hear the lot of you out there going “Pssh, right, we just want to stare at the women and drool”. After all, some of them are actually naked with only paint covering their bodies, and it shows if they stand in the full light. But the best part about this is that a person can see the artistry and understand the fact that it took a pretty amount of time to make this work, not to mention the patience and understanding on the part of the model. The human body is a miraculous and wonderful thing, but believe it or not, our bodies don’t like to stay still that long. It sounds funny, doesn’t it? But it does take a lot of concentration just to stand still.

That’s part of why meditation is so hard for some people since they really CAN’T stay still that long and need to be up and doing something. Now imagine that someone is painting your body with a variety of different brushes and colors and that you have to stand there for hours at a time depending on the design. Seriously, a simple painted-on bikini can take possibly an hour and a half, while something like the design you see above can take around 3 to 6 hours if not longer. And while the artist, who might be a woman or a man, depending on the comfort level of the model and who’s available, has to contain themselves and act professionally, the model has to bear the scrutiny of the artist as they decide how and where to apply certain touches to the look. It might make your eyes roll, but when this is how a person makes a living, it’s important to be professional.

The more complex the design, the more patience is required.

Looking at the design above it’s easy to think that it’s cool and it’s bound to take a lot of skill, but it’s also a lot of time. It’s kind of amusing to think about the model during this time since one can only imagine that those brushes tickle now and again, but then again if an artist is using an airbrush for much of it the sensations might be worse since imagine a jet of paint gliding across your skin. It’s not likely that it would be painful since airbrushes don’t have a great deal of force to them, but it’s very likely that it would cause some models to flinch now and again if the airbrush is used in various areas. Get your minds out of the gutter, there are other sensitive areas of the body that aren’t used for pleasure. Trace your finger gently down your side. See? It’s not just your love zones that are sensitive to touch.

But yes, imagining an airbrush or a regular brush hitting those spots does elicit a smile since while some models do get painted ALL OVER, the more sensitive parts of the human body do cause people to flinch slightly. Plus, if a design is complex, as in showing wrinkles in jeans, shirts, and the fine little details on the model you’ll see below, then it’s very possible that the model might have to possess the patience of Job to sit through it. One thing that both men and women would have to deal with has to do with anything going near or on the nipple, and that makes me cringe since some folks have very sensitive nipples while others don’t mind so much. But the mere thought of it, yikes. Just thinking about standing still while someone is applying paint to that area is enough to make some people squirm, either in pleasure or in discomfort.

Some of these looks are for photo shoots ONLY.

As fun as it might be to watch some of these women walk around at various events, it’s possible to think that it might happen depending on the convention. If it’s geared towards adults it feels possible, but if it’s a Comic-Con or similar convention, fuggeddaboutit. Any event that caters to kids and adolescents usually don’t tend to allow exhibitions like this, even though some of the cosplayers are wearing minimal clothing. There are still guidelines to follow though, and being naked with only paint covering your body tends to be a big no-no at some conventions since the idea of having kids see this is disturbing to a lot of people.

Yes, yes, I know what I said about the human body being beautiful and wonderful and all that, but one thing to remember about a convention that’s anything like Comic-Con is that it’s also a family outing as well as a chance for anyone and everyone to enjoy their favorite pop culture fantasies. But any naked bodies and it’s deemed inappropriate, no matter how much of a buzzkill it might be. Truthfully, I wouldn’t want my kids seeing a bunch of naked cosplayers covered in paint at a convention, since the image of a guy playing a blue-painted version of Dr. Manhattan from Watchmen is…yeah, yikes. Would I say the same about a painted version of Wonder Woman? Personally, no. With my kids there? Yes, definitely. It’s not prudish, it’s just respectful.

At the end of the day this is an art form much like any other, but with a canvas that a lot of people feel is either inappropriate or that needs to be confined to photos and not much else. The thinking behind that isn’t hard to figure out but it is enough to make a person roll their eyes since to be fair, the human body isn’t always beautiful on its own, but when it’s slathered in paint and given over to the to careful eye and hands of a real artist it can become something exotic and even impressive to look at. Seriously, try to look away from some of the pics below and I’ll bet you’ll be drawn back to them for one reason or another. Now think about having to actually work on the models and then you’ll know the real meaning of patience and self-discipline.