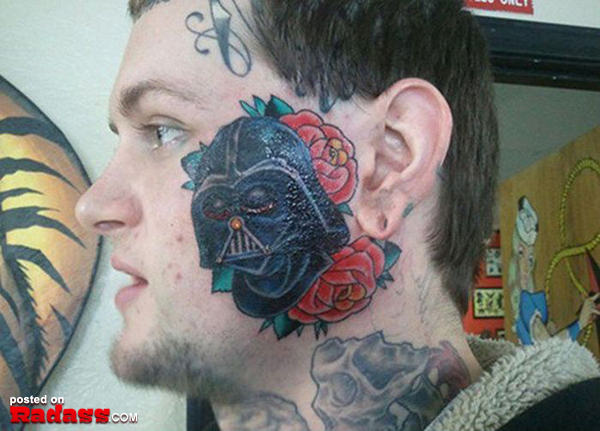 What exactly are people thinking when getting a tattoo?

Normally I wouldn’t bother roasting anyone, but there are some folks that make such piss-poor decisions that they tend to bring the mockery to themselves without fail. It’s easy to be the better person, but not this time…

Free advertising at your expense.

So, has Drake hit you up on that cellphone yet?

I get the feeling that he gets a great workout every day…running away from people that want to kick his ass.

This is actually pretty cool, I just wish I knew what it said.

Mug shots last for a while guys.

You could have at least had the name of the state tattooed on your face. Come on bro.

Not really sure about the thought process on this one.

Why in the hell would you want a pair of red lips on the side of your face? Ah well.

His skin is like a story, written in crayon.

Some of these feel like dares that went wrong.

This guy’s face looks like a storefront in a low-rent neighborhood.

He looks like he slept against a chain-link fence.

It’s a family tradition to look foolish. Then you’re nailing it.

Self-confidence is a dangerous thing sometimes.

Jimmy Neutron made a few odd decisions growing up.

This is what happens when you get a tattoo to make yourself hard, and then remember you’re not.

The fact that this became popular is depressing.

I’m not really certain what that is on his face.

Who cares about a face, really?

So, have gotten a royalty check yet? Of course you haven’t.

He looks like a cartoon character trying to be hard.

He’s gone to the dark side…

Do they? Do they really?

This is definitely one of the least coherent of the bunch.

I get the feeling that the Raiders would give this property back.

If you have to advertise it, you’ve never had it…and probably never will.

Wow pretty much covers it.

He must have been going for intimidating and all he got was irritation.

But how do you REALLY feel?

Don’t judge a person by their tattoos, but definitely feel free to judge the tattoos.

Anyone want to bet that the ladies on his face are the only ladies he’ll ever get?

I think the sweet evaporated and all that’s left is the sour.

I wonder if that scar is a result of the tattoo.

Let’s be clear, judging people’s lives by their tattoos isn’t what we need or aim to do. But judging their tattoos and thereby the decisions that led to them being applied, that’s pretty easy.