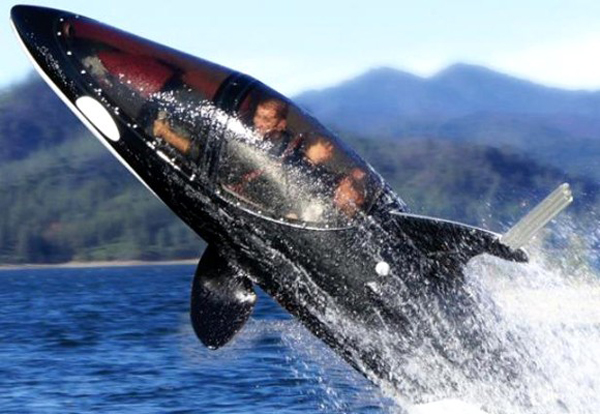 Buying Gadgets For Millionaires Is Not An Easy Thing To Do

Here’s a hovercraft which glides over land & water yet also soars in the air, upto 70 mph (more than 110 kilometers) with the aid of its integrated wings. 130-hp twin-cylinder and liquid-cooled gasoline engine which is also turbocharged and fuel-injected, drives its 60″ wood/carbon composite thrust propeller. On the other hand, a 1,100-rpm 34″ lift fan inflates its vinyl-coated nylon skirt for hovering above the ground.

Atomic batteries to power, turbines to enhance the speed is the main dimensions of its uniqueness. If you really want to strike a thunder of fear into Gotham City’s master criminals, then you need a Batmobile. But remember… not just any Batmobile, you need a fully-loaded replica based on the iconic 1966 mean machine that was driven by Adam West in the classic TV series. KAPOW! This “officially licensed replica” is decked out with a Batphone, Rader screen, “Detect-a-Scope” and rocket exhaust flamethrower.

A boat with a built-in barbecue grill, an umbrella and a trolling motor which provides waterborne cookouts for up to 10 adults. It contains 24″-diam. steel charcoal grill surrounded by an ABS table with each setting have a recessed plate holder, 3 beverage holders, and a silverware tray. The 11′-diam. nylon umbrella could be retracted while using the grill.

The Mother of All Computer Stations

Hand built gadget according to your requirements, the Emperor 200 is a computer workstation with many exclusive features like  touch screen control center, light therapy, an air filtering system, the electric powered leather seat, up to 3 x 27″ LED screens and a nice sound.

Dark Knight crazy fans with $2 million hanging around, make their friends jealous by installing this high-tech Batman-inspired screening room in their homes. It features a Bat-mobile hidden behind bookshelves, life-size Bat-suits and much more. It is currently being built into a 12,000 sq. ft. home in Greenwich, Conn.

The room includes a 180-inch movie screen, a series of accessories inspired by the film like gargoyles and a cylinder-shaped elevator, that touts the bat symbol.

The Bugatti Veyron Super Sport is not just a car. It is dubbed as the fastest street legal car of the world, Its speed limit is as fast as 268 miles per hour (more than 430 kilometers per hour).

With a keel laid on August 10, 1945, it is one of 12 remaining PT boats in the world. Though it is “armed” but all the weapons are deactivated, (one  single .50- and two twin .50-caliber Browning machine gun stations,  four tubes that each housed a Mark VIII torpedo, an aft 20mm Oerlikon cannon, and two depth charge launchers.) It “planes” on top of the water at a speed up to 42 knots, a necessity for quick getaways after a torpedo run. It’s updated with most modern electronics, a radar and two turbo-charged heavy diesel engines that provide 1,100 total horsepower. Details: 72′ L x 18′ W x 7′ 4″ H. (45 tons)

Here’s the new 2013-model year JETLEV R200x, the water-propelled jetpack. Its quqlities are 1: enhanced engine intake improved power with fuel economy, 2: ”Easy Ride” pilot seat for improved comfort, 3: full electronics system upgrade and 4: the only water flight system that is authorized for use by US Coast Guards, by grant of USCG exemption. It can lift you upto 30 feet into the air at 25 miles per hour for four hours.

Here’s a streamlined, two-persons watercraft which breaches and submerges just like the famous Orcinus orca, after which it was designed. Its watertight 1/2″-thick acrylic canopy pushes and pulls twin control levers to articulate the whale’s pectoral fins for rolls and stealthy dives. On the right lever’s the throttle trigger and the steering at dual foot pedals that control vectored thrust of the craft’s ’255-hp’ supercharged Rotax axial flow engine that enables a realistic behavior like porpoising or skyhopping, etc. Details :17 1/4′ L x 3 1/2′ W x 4 3/4′ H. (1,450 lbs.)

This is a two-persons submersible that can descend to a depth of 1,000′, provides access to underwater features like shipwrecks, coral reefs and the sea floor. It contains a completely transparent climate-controlled 3 1/4″-thick acrylic pressure sphere that keeps explorers safe when dipping even into the mesopelagic zone.With a maximum speed of 3 knots, it is powered by a 120- and 24-volts battery bank which provides upto six hours of continuous undersea adventure. The 56 3/4″-diameter sphere’s inner diameter contains comfortable and upright seating for the passengers. A VHF radio communication and underwater telephone communicates while submerged. It is equipped with a thermometer, barometer, hygrometer, fluxgate and magnetic compasses, depth gauges, mechanical clinometers, pressure gauges, and a GPS receiver. (10 1/2′ L x 8 1/2′ W x 6 1/4′ H. (6,600 lbs.)

This is the moving simulator which provides a realistic stock car racing experience. It uses the same kind of moving platform mechanics that are found in the museum simulators, and electric actuators built into the base cause the simulator to roll and pitch easily. A  descaled, fiberglass shell and netted windows covers its steel frame roll cage.