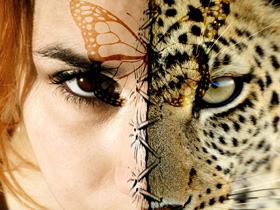 Getting In touch with Your Inner Animal

You can feel sometimes, can’t you? Something you see or hear, or feel gives you a rush of adrenaline that you can’t explain, and you feel your chest swell, your eyes focus, and you feel that call. Speaking clinically and from a biological standpoint, it’s a natural reaction to stimuli that are designed to gain a reaction. How boring. That need to chase, to hunt, to react, is what keeps animals in the wild alive, and at one point in time, humans absolutely needed this. Look at us, we have no claws, our hide isn’t thick and wooly or furry, our reflexes are a joke next to a wild animal’s, our eyesight, hearing, and other senses are just as dull, since even the finest human specimen might as well be an adolescent in the wild. Granted, experienced survivalists have a distinct edge. But getting back on the subject, the reason why react could be broken down biologically, but one popular reason we act as we do at times is that the animal spirit is still buried deep inside. Which animal? Well, that kind of depends on how you react to the world around you.

How you can connect with your spirit animal.

This is interesting since there are a few ways to do this, and only a few are really going to be pushed by anyone that’s willing to tell you what they believe. The thing about a spirit animal is that many will tell you that YOU don’t necessarily get to pick which animal you have an affinity with, which is odd since one might think that they know themselves best when it comes to their own life and needs. Well, don’t feel too bad if someone tells you differently, there might be something you’re missing or something about yourself that you’re overestimating. Hey, if we all simply chose our spirit animals the world might soon be overrun by lions, tigers, and bears…Hey, Dorothy might have been onto something…or on something, who knows? Here are a few ways that you might use to ‘find’ your spirit animal.

Every spirit animal has their own attributes, but you don’t need to align with just one.

Remember what I just went over in the last section? There’s a good chance that you don’t align perfectly with just one animal, but might be compatible with many. Seriously, how cool would that be? Instead of just sharing one attribute, from a spiritual standpoint, you might actually embody another at the same time! It’s a stretch, I know, to think of yourself as an animal, but look at it this way, human beings are indeed animals since we share a great number of traits with the animals around us, and while everything has evolved in some way our species took a path that perhaps fast-tracked us to where we are now, which would be why wild animals sometimes appear a lot smarter and tougher, and why we don’t always understand the world around us, but can still feel something that might be missing. Yeah, I know, your eyes are rolling again, but keep in mind there’s a lot that we still don’t know about our world or our connection to it.

Most of what we do know is based on a lot of guesswork that’s been assumed to be right for quite some time. A lot of facts can’t really be disputed since they’ve been proven more than a few times over the last few millennia. But there’s a connection there, that’s for certain, and people can feel it every now and then. How we react to it is going to differ from person to person, but the fact is there is still a bit of that inner animal buried deep, past the civilized human beings we see ourselves as. Some people can tap into it easier than others, while some want to deny that it even exists. Hey, whatever floats your boat, but it’s hard to deny that feeling that comes along every so often. That’s the wild side reminding you that the beast inside is sleeping, not dead, or fully evolved.

Finding your spirituality is a very personal thing, and some folks tend to scoff at it. But if you know yourself and know who you are, be comfortable in that knowledge and share it whoever you want.